Induction forge-
I’ve had a number of people ask me about this machine so I thought I would add some insights here.
I recently purchased a Induction forge with the idea it would help make it tolerable forging in the hot summer months. Now that I’ve have the machine up and running for a few months I can safely say it’s a awesome bit of kit. I can heat a 1/2" round from cold to forge welding throwing off sparks hot in less than 30 seconds. I’ve heated 1.5" hammer blanks in about a minute so the machine is really quick to heat. The beauty of it is I can keep the shop doors shut and not have to worry about the fumes or the heat from the forge heating the shop up. I can also take my time and forge at my own pace. Another bonus is cost, It cost something to run but dang if I could see a difference in our monthly bill. I don’t have to have the forge running all day costing $. I would say the cost is negligible unless you are full time blacksmith running the machine all day long.
Drawbacks-
Where it doesn’t work is for long heats. I can heat about a 6-8" section of a bar but thats about the maximum. I have a couple of different coils for different size stock I have a 1.25" and a 2.25" coil Plus a 2" vertical coil that came with the machine. Another pain all the fittings are metric. I need to source 14mm brass compression fittings to make more coils. The copper pipe is metric too but I believe 5/16" copper would work. Anyone knows of a source in the states please let me know. Every place I’ve gone locally they act like I’m asking for some sort of nasa part. So in the end I still need my other forges for larger / longer heats and stock that won’t fit in the Induction forge. Also If I need to soak a piece of steel It can be done with the induction forge but figuring out just the perfect setting is going to be guesswork (for me) I can only imagine it’s easier with the gas forge.

Setup-
I originally thought this was going to be a simple hand over the cash plug and play setup but I encountered several hurdles along the way. I though I would share how I went about setting up the machine and hopefully it will help others who want to try induction forging. First I did some research and found Eric Jergensen on youtube. He has some really great videos on induction forging but he never really got into the water chiller which is the part I had the most problems with. Check out his videos here- youtube.com/user/EricJergensen I made the leap and ordered induction heater and a water chiller from joyfay.com. Shipping took 3 days for the induction forge and the chiller a few days later, so it was much faster than I originally expected. The packaging on the induction heater was top notch. It arrived in a well built wood crate with plenty of properly fitting foam in the crate itself. After hooking everything up adding distilled water and plugging it in I was getting a “lack water” warning. I went back and forth with joyfay and they suggested something was wrong with the induction unit. I sent it back on their dime and the new one arrived a few days later. Hooked it all up again and… same problem. Scratching my head and reviewing the terrible documentation they sent with the unit (like Chinese translated to russian then back to english…difficult to understand). After a bit of investigation I tried just hooking my garden hose to the machine with the output just running into the yard. The induction unit worked perfectly it was the chiller they suggestd and sold me that was the problem (not enough water volume) Sent the water chiller back and on to Plan B - to build my own water chiller that could handle the volume the induction heater requires.
I built my own water chiller. I used a pro-con pump (listed blow) and a heat exchanger from ebay (also listed below). With the addition of a fan to pull air over the heat exchanger I had my own water chiller. It works well but I’m using a 5 gallon bucket for the water. I’d like to have a larger volume of water so I plan to move up to a 15 gallon container sometime in the future.
Hooking the induction forge up to the chiller is a little bit of work because the input to the forge requires two water lines and the output has three lines out. It would have been really nice if they could have made all those connection inside the unit and only have one line in and one line out. I ended up making a divider for the input and the three output just drain directly into the 5 gallon bucket. The pump has a screw in it that allows you to set the volume of water but I left at the factory setting and it worked perfectly .

So that is what I did, I’m not saying this is the best way but this is the best I could come up with. If anyone has Ideas for improvements or thoughts or questions on the machine I’d love to hear about it.
Thanks,
Jeff
Javos IronWorks.

Video showing the machine in use- youtube.com/watch?v=TWUpdrkgbg8

This is the chiller Joyfay told me would work with the induction heater. Do not buy this! the chiller worked fine but the volume of water was half of what was required.
USA S&A CW-5200DG 110V Industrial Water Chiller for 130W / 150W CO2 Laser Tube - $470- $50 shipping from Ebay

Material for the cart it all stands on- $50 for the wheels and the steel sheeting. I had leg material from a previous job. 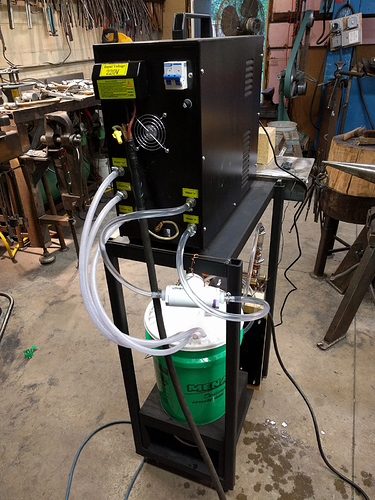 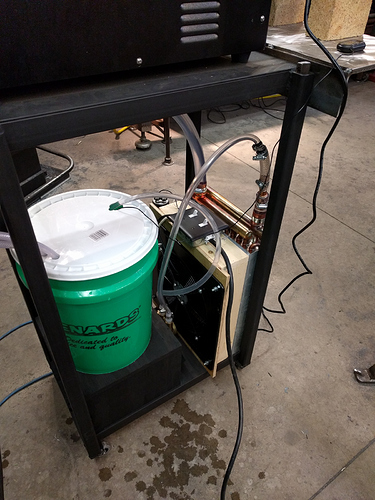 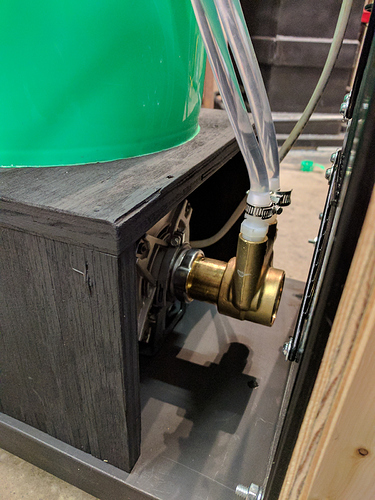 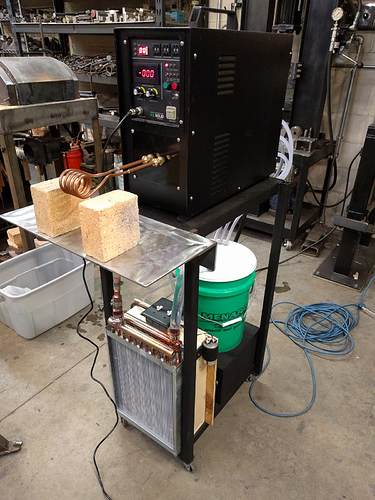 Below is a link to a video showing the operation of the machine-
youtube.com/watch?v=TWUpdrkgbg8