A while back, I built a forced air forge for myself. I wanted one in order to reach forge welding temperatures in a gas forge.

I then drew a face on it, and named it. Meet George the Forge.
[album]2[/album]

George the Forge is relatively easy to build. First, I found an old air tank at an auction and picked it up on the cheap. I cut off each side, and placed a couple of fire bricks down for a flat surface and lined the inside with 2" kaowool. I then coated the kaowool with ITC-100, a refractory cement that helps with forge temperature and is resistant to flux.

After putting George together, here is how he looked, without his face (which I kept once I cut off the end).

The gate valve controls air flow into the cavity. What isn’t shown very well in the image here is the T on the vertical part of the 2" goes to a 5/8" pipe, that flow is controlled by a needle valve and then goes to the propane tank.

I haven’t measured temperature inside, mainly because I don’t have the means to, but it does get to forge welding temperatures! Anyways, it was a fun project.

Very cool Grant! Thanks for sharing.

I can’t map out from the photos how the burner works with that blower is it all in the same piping? ( gas and air?)

It is all the same tubing, the gas gets introduced into the air around the middle of the vertical part. The reducer from 2" to 1-3/4" pipe mixes the gas and air, then it runs into the combustion chamber.

Here is a shot of where the propane gets fed into the pipe. There is a needle valve, then a ball valve for a quick shut off, and i tapped a 2" cap. 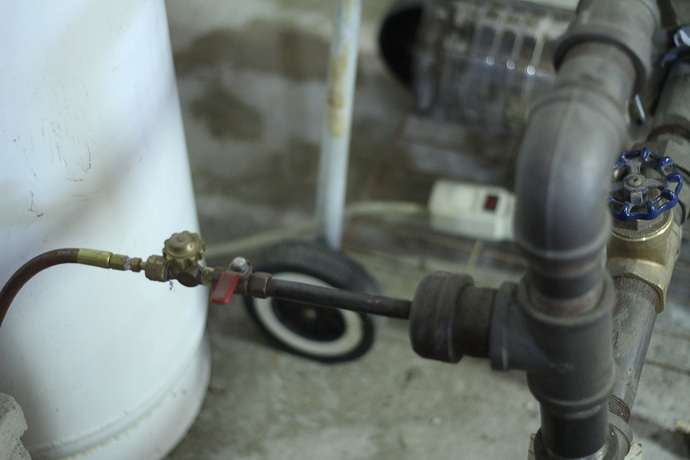 I adjust the gas flow at the needle valve here, and the air flow at the gate valve in the right side of the photo. This way I can either get a gas-rich forge, which is that look where all the flames are coming out.

Aha I get it now. I’m thinking about building a larger forge this winter. I may have to steal this design

thanks for the pics