So messing with a coal forge is not to much trouble, but I see the advantage to a propane forge. I have been wondering about them.

How much propane do they. Go through? Can you use a grill size bottle or is that too small?

What advantages are not apparent?

What are the downsides to propane?

I have a coal forge I hardly use at all, just cause its not as convenient. I use primarily propane.

The amount of propane they go through, as far as I know, is dependent upon the type - I believe that forced air propane forged are more efficient than regular propane forges where air is drawn in (read: one that has a fan that blows air into the chamber, with propane).

20lb is fine to use, I know Javos uses 20lb tanks for ease of moving - one problem I’ve had with 20lb tanks is that they freeze up after a while. I use a 100lb tank with my forced air forge.

Advantages? Cleaner fuel, easier to get a hold of, ease of use, and you can get more regulated temperatures (I hovered mine around 1550 last week to do a heat treat). Don’t need to monitor as closely as you don’t really have a chance getting a sparkler

Downsides? Well, Coal is cheaper for you I think! You can more easily get centralized heats with coal, with propane you gotta heat a piece up and cool down the parts you don’t want to tamper with (wet rags, spray bottle, etc).

I think coal you can get things up to temp a lot quicker, due to a hotter fire.

Just a few I could think of - I think many blacksmiths I know have each, as they kind of have different uses - especially when forge welding.

How low an you get them to run? Have any of you successfully used them to temper?

Is that asking too much from the tool?

Tempering is another beast - you can temper with it, but depending on what you need to temper, you might need a more controlled environment or a sharp eye.

Example is - when tempering a knife, you usually temper a high carbon knife (1095) to 400-500 degrees for 2 hours. Twice. With that, I use a toaster over that I actually put an extra electric burner inside to get up to 475… I don’t watch it.

When tempering a hammer made of 1045, how I’ve seen it done, is you have a stack of fire brick that you pile in a certain way so that there is a 1" slit opening or so up on top. You put the hammers ontop of that stack, with the eyes right over the slit. Watch carefully as the temper colors draw, as soon as the hammer faces are straw to dark straw you toss it in water.

Some other people don’t get as technical. My gas forge can’t get down to 500 degrees, maybe if I had a different burner I could but I couldn’t, so I really don’t use the forge for tempering. Others very well may though.

I know the guy who makes hammers up here in Minnesota (Nathan Robertson), I see him use a pile of bricks for getting forging temperatures, as well as annealing, heating, and tempering.

I’m thinking of getting a pyrometer and using my small ceramics kiln as a heat treat and tempering furnace, by using a digital pyrometer I can adjust the temp degree by degree, and it’s ony $100 for the meter.

You can save a few bucks and build your own - they are super easy to make. I did mine.

If you’re interested in going that route, I’ll write up a how to that is a little more detailed. Really, it’s super easy. You might not even need that high of temperature thermocouple… That will save some moneys.

Also you can shop around for a cheaper PID if you wanted too.

I think I was over thinking it…I just copied jarvos! Picked up this guy for $50 today of craigslist. The controler is not functional, but the digital temp display works…I just hard wired the elements to the power! It’s up above 1570F now, the only problem is it reads celcius only…my brain does not read celcius! 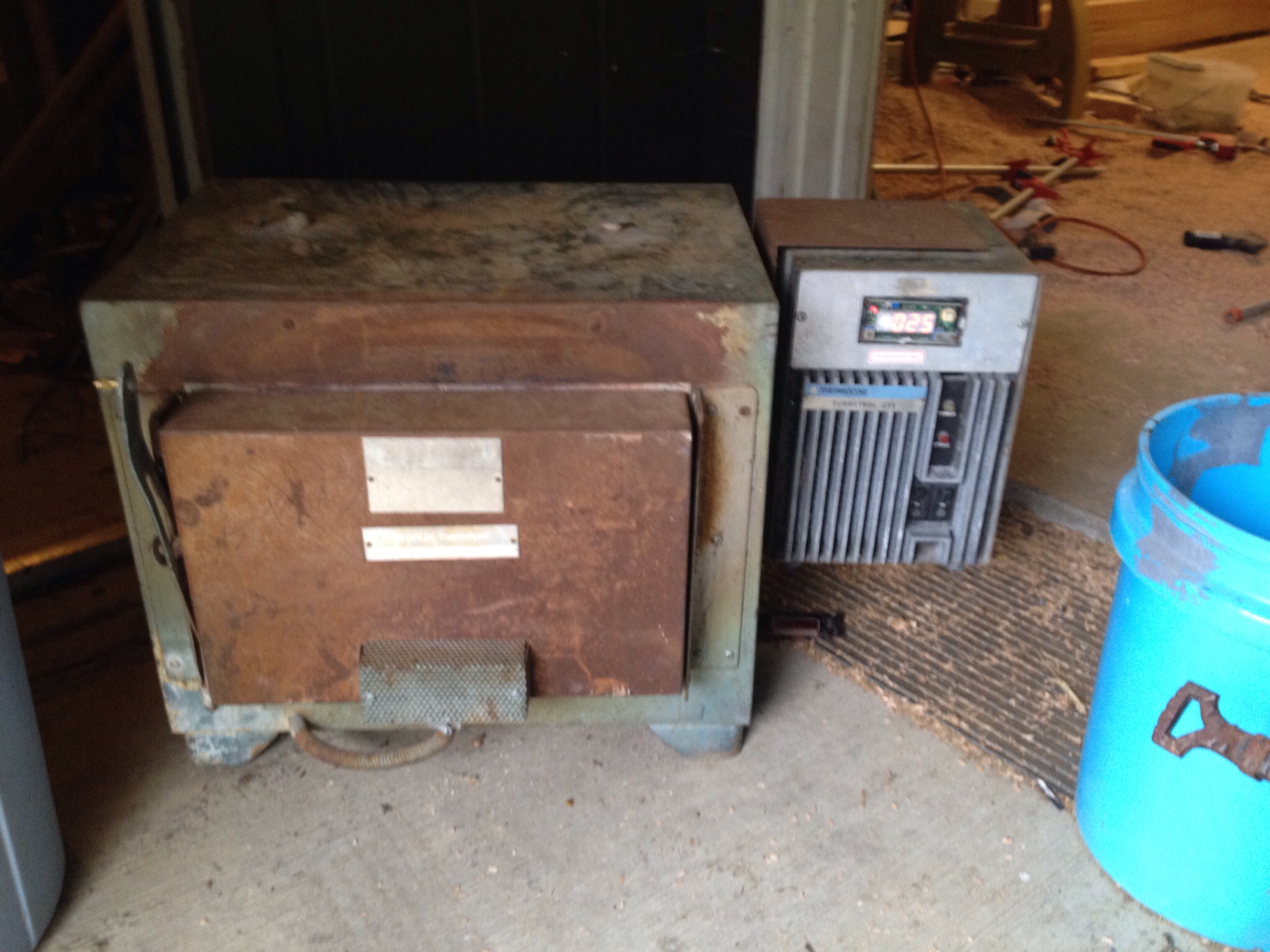 I took it to 1980 degrees F to see it run well, now I am tracking the rate at witch it cools, then I can turn it on and off to soak at a temperature…more work than if it had a controller but not too bad!

I think I’ve started something

The new furnace looks great and a nice price too!

This is the forge I use-
nctoolco.com/proddetail.php?prod=0113

I really like it because I can do a quick heat and turn it off to save gas then with the click of a button it fires back up. I run a 20 pound gas grill type bottle and haven’t had any trouble with freezing up that Grant talked about. The 20# bottle is nice because its easy to move around and get refilled. In general I’m guessing I get 10-12 hours on one tank of gas.

That’s the same ones I was looking at, I was wondering if I could get away with the baby model, or are the two burners worth the extra?

I really like my two burner. With the open ends it allows me to heat longer sections more consistently. When I don’t use the open ends I loose fit a few fire bricks in the ends to keep the heat in. I’ve had this one for 15 years with no problems yet. 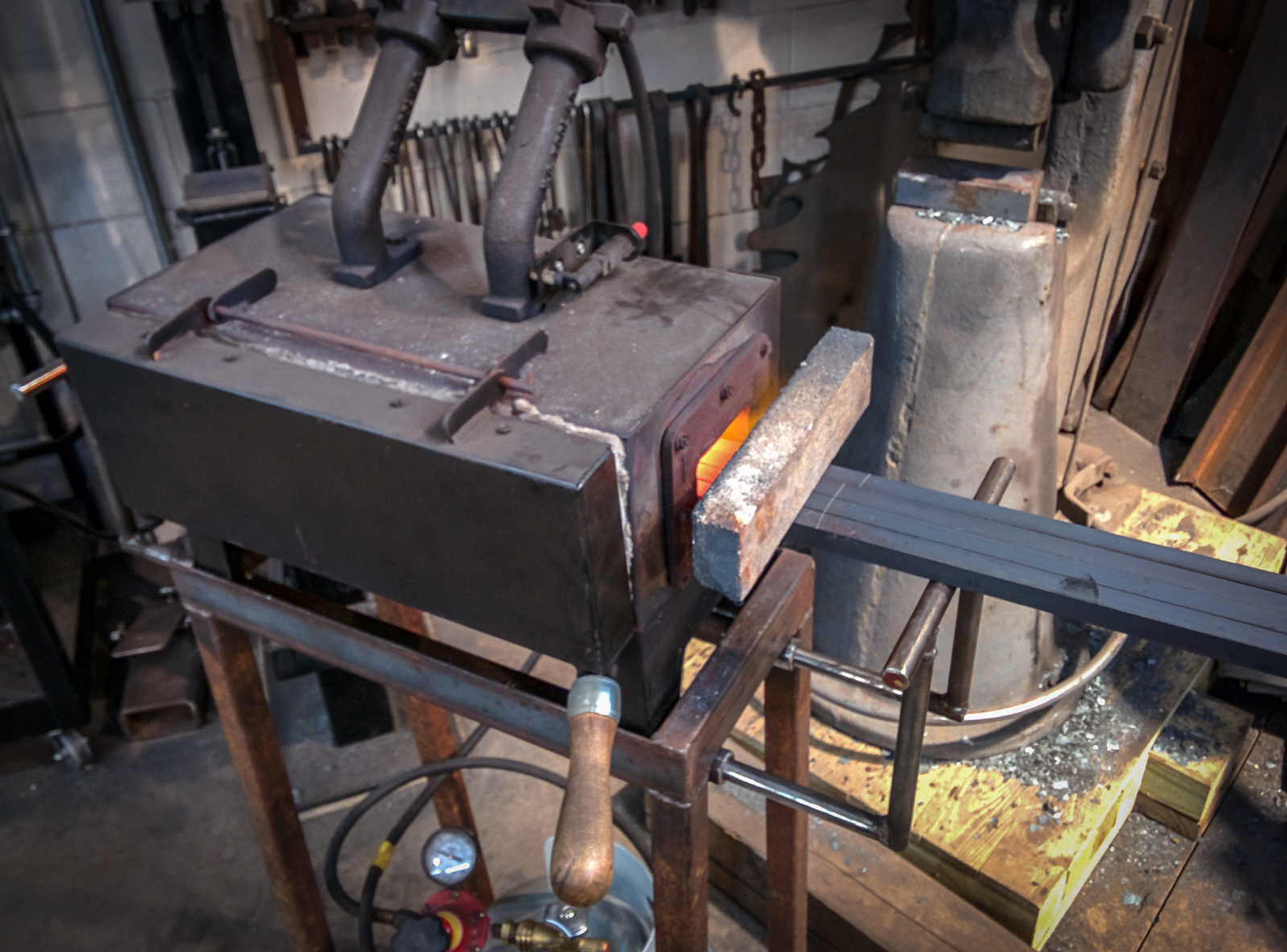